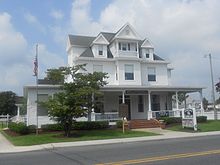 Selbyville is a town in Sussex County, Delaware, United States. The population was 2,167 at the 2010 census, an increase of 31.7% over the previous decade.[1] It is part of the Salisbury, Maryland-Delaware Metropolitan Statistical Area.

Selbyville traces its history back to its founding in 1778. It was incorporated in 1902.

Selbyville was originally known as Sandy Branch due to its location on a branch of that name emanating in the Cypress Swamp at the head of the St. Martin’s River. A grist mill and saw mill opened there in the late 18th century. In 1842, Sampson Selby began marking packages for delivery to his country store, Selby-Ville.

By 1918, Selbyville was the major supplier of strawberries for the entire east coast, an industry that remained strong until the 1930s.

Today, one of its main employers is Mountaire Farms, a poultry company, which runs a processing plant on Hosier Street.

This town is also home of the Mumford Sheet Metal Works, which once held the world record for the largest frying pan in 1950.

Selbyville is also home to Doyle’s Restaurant, which has recently been recognized by the State of Delaware as the oldest operating diner in the State, and still has the original 1930’s diner attached to the main restaurant that is still available for diners to eat at.

There were 615 households out of which 28.3% had children under the age of 18 living with them, 51.9% were married couples living together, 14.0% had a female householder with no husband present, and 28.6% were non-families. 24.6% of all households were made up of individuals and 13.8% had someone living alone who was 65 years of age or older. The average household size was 2.67 and the average family size was 3.05.

The former home of Senator John G. Townsend, Jr., located at 11 South Main Street at the intersection with West McCabe Street, became the site of the Selbyville Public Library in 1966. A sign on the wall inside the library identifies Senator Townsend’s dining room, where former First Lady Eleanor Roosevelt dined with the senator in 1946. Other distinguished visitors at the senator’s home included future President Richard Nixon. The home itself was built in 1904. The senator’s family donated his house to the library after he died.[6]

The library’s Board of Commissioners hired Patricia Woods, former school librarian of Sussex Technical High School, to serve as the Selbyville library director in July 2012. She retired after 21 years as librarian for the high school. Under her administration, the school library started operating in a small office without any books and grew into a six-room, award-winning facility.[7]